I’m back at Creative Corner today…with an interview that ties directly into my own work.  Today I’m chatting with model Kellie Adams, whose lovely face graces the covers of my upcoming 4-book series, Sex & Secrets.  With Exploits, Book 1 of the series nearing publication, I can think of no one better for today’s interview.

I’m a very creative person who likes to express her creativity through a variety of different mediums.

Probably the cover for Sanctuary by Clara Grace Walker, because I like the intensity of it.

Somebody keeps building walls all around it and making the villagers pay for it.

My awesome cat Shania/the dragon claws their eyes out & saves the day.

Kellie modeling one of her own costumes.

We’re going to meet up with Jennifer Lawrence and Taylor Swift.

We are sitting with Blake Lively, Taylor Swift, Jennifer Lawrence, Kristen Stewart, and anyone they feel like bringing. 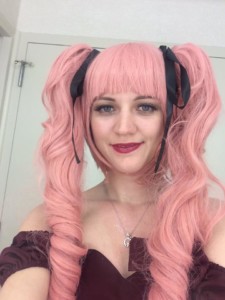 Lord of the Rings, because I don’t want to get blown up.

Harry Potter.  He’ll provide plenty of entertainment with his conjuring skills.  Peter Davidson and definitely Peter Capaldi, (it’s going to be a party of Peters).  They can take on their respective Doctor Who personas, and spend the entire party filming a Doctor Who special.  Simba from the Lion King, because why just have a lion when you can have a talking lion.  Nick Burkhardt from Grimm will be there and hopefully he won’t think Simba is a wesen.  I’m not sure if Simba being animated will make that task easier or harder.  Daenerys Targaryen, and bringing her dragons will freak Nick out even more.  Maybe Harry Potter can help with that.  Shakespeare will ensure lively conversation, and Socrates can spend the night philosophizing.  And because this night is going to be special, I have to invite my friends Angel and Annelise to share it with me.

In case you’re wondering how the party goes down…  The party begins with my best friends Angel and Annelise arriving.  Shortly after, Harry Potter arrives, followed by Daenerys Targaryen.  Upon hearing she is the mother of dragons, Harry immediately asks her what kind of dragons.  He tells her he once faced off against a Hungarian horn tail, but he’s heard that Chinese fireballs can be rather volatile also.  All of this just bores poor Daenerys, who goes looking for a drink, while her dragons make saganaki for the guests.  Peter Davidson (Doctor #5) and Peter Capaldi (Doctor #12), have arrived in the meantime.  Capaldi wonders what bloody idiot would be foolish enough risk a time paradox by inviting him and his counterpart.  He blames the Master, and begins interrogating the guests, pulling out his stethoscope and listening for a double heartbeat.  Davidson wonders what planet dragons are one and what is the science behind this magic they speak of.  The dragons have mesmerized Socrates also, and he ponders what is a dragon, truly.  Nick Burkhardt, of course, knows better, being a Grimm.  He tries to muzzle Socrates, and also Shakespeare, who is busy waxing poetic about worlds of magic and dragons.  Nick accuses them both of being wesen sympathizers.  Simba spends the entire party trying to dodge Nick, and now I think he’s miffed I’ve invited them both.

My friends and I?  We sip wine and try to stay out of the crossfire.

Yes…I’m going to be a robot…or a vampire pirate.

As a robot…we discussed this above.

Any time other than right before the world’s going to blow up.

Get a financial manager.

Squish the witch and steal her shoes.

Getting to dress up and do make-up.

Trying to think about something that puts the correct expression on my face.

Oscar de la Renta.  I would love to assist in making gowns for red carpet events.

I’d rather just model them myself.

Not a problem…and I still wear heels.

Thank you so much for joining me, Kellie!  Best Wishes on all your future endeavors!!

Clara Grace Walker: A born lover of soap operas, mystery and romance, bestselling author Clara Grace Walker is on a mission to bring glitz, glamour and continuing storylines to the world of romantic suspense.

Your email address will not be published.